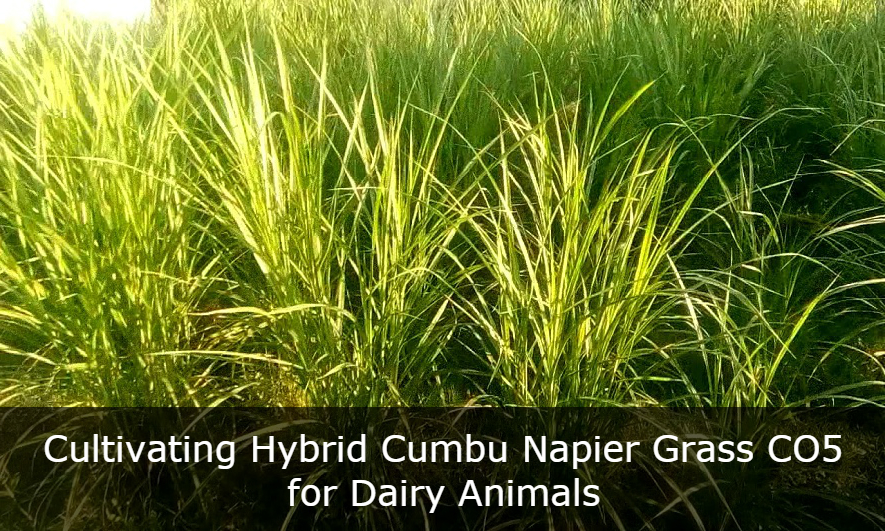 Napier grass, also known as elephant grass, is a plant native to the African continent. For many years, Napier grass has been used as cattle feed, but it has its issues. While camels and other lactating cattle can and often do in natural Napier grass, the plant leaves aren’t the most palatable meal they can have. Hybrid Cumbu Napier grass CO5 cultivation can solve palatability and other issues in camel and cattle feed.

75% of all rural households in India own at least two cattle, and sometimes up to four. These lactating animals provide milk for the family and are also a part of a more extensive supply network to meet milk production demands in urban areas. But for the 1st time in India in 2020, the country is projected not to be able to meet increased milk demand. The reasons for this are numerous, but shrinking land for cattle feed production is a primary culprit.

Hybrid Cumbu Napier grass CO5  is a high-yield crop that is also fast growing. The plants don’t need much space to grow, and they can be harvested year-round multiple times. Unlike other forms of cattle feed, farmers who plant superior Napier grass hybrids won’t have to keep buying concentrate feeds, which can harm their profits. Cumbu Napier grass is also known to increase milk production in lactating cattle, and help goats and sheep grow. Napier grass has large, juicy, and tasty leaves that animals love to eat. Unlike many other plants that can be used as feed for camels, Napier grasses do not erode the soil.

How is Cumbu Napier grass CO5 planted and cultivated?

Hybrid Napier grass grows year-round, even in winter. The plants do best in the tropics, where the ideal temperature is around 31 degrees Celsius. When appropriately watered, the plants will produce high yields. Ideally, plants should be grown in an area with light showers and lots of bright sunshine. Napier grass does not like water-logged fields or places that are flood-prone. Water requirements for super Napier CO5 grass and other Napier hybrids is about 800 to 1000 mm.

Napier grasses prefer light, loamy soil or sandy soil, but they can handle a range of soil environments. However, hybrid Napier grass does not like heavy soils. Land should never be stagnant, but it must be wet at the root zone. Farmers can obtain incredibly high yields if they plant the shoots in deep, fertile soil that is rich in organic materials and nutrients. Napier grasses will tolerate pH ranges between 5 and 8.

Cumbu Napier grass likes to grow in a weed-free and compact seedbed. Farmers will need to clear the field of thorns, weeds, and other bushes before planting the Napier grass cuttings. It’s possible to start with a first disc plow, and then two or three fork ploughings. Fork ploughings should be done to level the field and remove clods of soil or other organic matter.

Manure can be applied before ridges are formed for plantings. It’s best to make ridges across a slope with spacing of 60 cm wide, and ridges at the height of 25 cm. In this way, irrigation can be more uniform. About 1600 cuttings can be planted per acre. The first weeding will take place about 30 days after cuttings are planted, and fertilizer can be applied at this time.

Farmers will want to plant Napier grass cuttings at the start of the monsoon if there is no irrigation available. If an irrigation facility can be used, planting can occur at any time. Cuttings must be planted at a slant on the side of the ridge, and one node should be placed below the soil. The earth around the stems should be packed tightly so the roots can become well established.